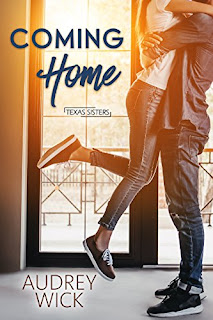 College professor Mallory Fredrick loves her job in a city that feels like home, but after a student attacks her on social media, she loses her peace of mind and confidence. When her college offers a sabbatical, she jumps at the chance to escape to her hometown in Texas.

Entrepreneur Alec O'Donnell specializes in helping people in crisis. He’s built his company and career on packing up lives as people start over. It's just business until he meets Mallory. Something about the beautiful and fragile woman who still manages to hold on to her sense of humor affects him. As feelings develop, he realizes he's not ready for her to move out of his life.

Can Mallory find peace, or will a second setback keep her from coming home for good?

College professor, Mallory Fredrick and Alec O’Donnell meet when Mallory needs a moving company to help her move some of her things from Santa Fe, New Mexico, to her sister’s house in Seguin, Texas.  Mallory, a college professor took a sabbatical after a student attacked her on social media.  She was fearful of what he might try next.  Along the drive to Texas, Mallory and Alec become good friends and they start having feelings for each other.  Mallory doesn’t really want a relationship, but Alec refuses to give up.  He even goes as far as inviting Mallory to his family reunion in Santa Fe, which Mallory accepts.  But, that was when Mallory found out something about Alec’s family that scared her back to Texas as fast as she could get there.  Now Alec must work extra hard to get Mallory back and to help her overcome her fears.

I enjoyed this book a lot.  The characters were believable and the story kept me interested the entire time I was reading. There was romance along with a bit of suspense to keep the story moving along nicely.  There was even a Persian cat named Bella who stole quite a few scenes.