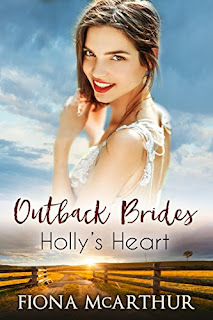 Doctor Ben Brieley is keen to settle into life as a small town general practitioner and help his grandmother run Brieley Park. The city life was never for him. He’s finally found the peace he’s longed for, until the arrival of that one woman he’s never been able to forget, threatens to shatter it all. No way is he revisiting that road of unrequited love...except Holly Peterson seems fragile and in need of saving, and Ben’s never stopped being Holly’s white knight.

After losing her sister and her faith in the world of medicine, Holly Peterson moves home to Wirralong along with her two nephews. Determined to rebuild her life and create a loving home and sense of belonging, she opens the Outback Brides Coffee Shop as her new vocation. When she learns that Ben Brieley, the man she said no to years ago is home to stay, Holly fears she’ll lose her heart and her focus on her nephews if she lets him in.

Will Ben be able to break through Holly’s fears and barriers or will history repeat itself and destroy him once again?


Old school friends Holly Pederson and Ben Brieley are reunited in their hometown of Wirralong.  Both are doctors, but Holly quit practicing after she lost a patient and it shook her confidence.  Holly is focusing on raising her young twin nephews after her sister passed away.  She has also reopened her sister’s coffee shop and enjoys working there.  Ben is back in town to help his grandmother out and he is also opening his own practice.  Ben’s plan was to find a wife and settle down.  But when he sees Holly again, his mind turns to her.  He was always in love with Holly even though he knew she wasn’t interested in him.  Maybe now Ben will have a chance to win Holly’s heart.

This was a good book.  It touched on all of the elements to keep my attention and keep the story moving along quickly.  Of course there was the reuniting of old friends and their growing romance.  But, it also has a sweet side with the boys, Tom and Pat.  I also enjoyed the medical part which I usually I don’t enjoy those kinds of stories as there are too many terms and situations that I can’t relate to.  But, this author wrote the scenes where anyone would understand.   I especially enjoyed the camping scene where the boys came to respect Ben as part of their family.  This was an all-around good book that I would recommend.  It is also a nice way to wrap up the Outback Brides series.
Posted by Janine at 5:00 AM