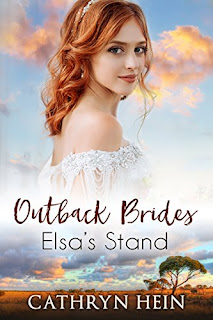 When the sudden death of his mother forces outback opal miner Jack Hargreaves home to Wirralong, his plan is simple: mourn his mother, sort out the family farm, and get the hell out of the town that has always hated him. But Elsa O'Donoghue, the beautiful hairdresser with a big heart and even brighter smile, has other plans.

From the moment Jack strides into her salon and helps himself to her clippers, Elsa is in lust. He might be a poster boy for the strong silent type, but she senses there’s a good man behind that stoic facade. With her business taking off, Elsa is finally ready for a relationship and Jack is just her kind of man. Not to mention, she’s never said no to a challenge.

Worried their association will harm Elsa’s business, Jack tries to avoid her, but Elsa is irresistible. Soon, she has him believing and hoping for a future with her in Wirralong, but another family tragedy shatters Jack’s fragile dream. Jack knows he must leave Elsa to protect her, no matter the cost to himself.

Jack Hargreaves, didn't plan on staying in Wirralong for long.  He was only there for his mother's funeral and to sort out the farm.  Then, he would head back to Lightning Ridge where he mined for opals.  He always felt out of place in Wirralong and never felt welcome.

Jack met Elsa O’Donoghue at her salon where he stopped for a haircut. There was something special about her and Jack really wanted to get to know her better.  So, he decided to stay in Wirralong a while longer.  Plus, he really wanted to find the legendary Strathroy sapphires that his mother mentioned during her last call.  But when a situation occurs at Jack's father's house and Jack gets caught up in the drama, will the scandal be the end for Jack and Elsa's new romance?

I liked Jack right from the start.  He was a hard worker, a bit stubborn and standoffish, especially when it came to women and the town he was raised in.  But, I could tell he had a sensitive side.  He just needed the right woman to bring it out of him.  The author did a wonderful job with the plot and the background details of the characters.  I enjoyed the setting too.  There were some emotional moments along with some parts that made me laugh.  All around, this is a great addition to the Outback Brides series.