Review: Recipe for Disaster (Men of the Secret Service #1) by Tracy Solheim 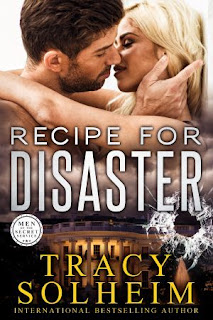 Secret Service Agent Griffin Keller always gets his man. And his woman. In pursuit of an international counterfeiter known only as “The Artist”, Griffin stumbles across paintings stolen from the White House and swapped with forgeries. His only clue to the thief’s identity–a dish towel from the White House kitchen.

White House pastry chef Marin Chevalier desperately needs a date to her cousin’s society wedding. Unfortunately, her busy schedule leaves her little opportunity to meet eligible men. When a sexy Secret Service agent shows up in her kitchen—and just about everywhere else she goes—Marin believes she’s finally met the perfect date. But when a series of frightening accidents and near misses plague her, Marin must rely on Griffin as more than just her “plus-one.”

As dead bodies begin to pile up around Marin, Griffin is convinced she’s the link to The Artist. Too bad the curvy chef has gotten under his skin like no other woman. When the clues finally fall into place and Griffin realizes Marin is not the suspect, but instead the target, he’ll risk everything in his arsenal to keep her safe.

Secret Service Agent Griffin Keller, is on the tail of an international counterfeiter known as The Artist, when he comes across stolen paintings form the White House.  His only clue, a dish towel from the White House, leads him to pastry chef, Marin Chevalier.

Marin comes from a wealthy family that owns hotels all over the world.  Some have been used as drop off sites for counterfeit bills, so Griffin decides to keep an eye on Marin in case she is involved.  With Griffin hanging around so much, Marin starts to think of him as the perfect date for her cousin’s wedding.  They soon find themselves caught up in more than they expected.

I was surprised by this book.  It started a little slow, but once I got into it, I couldn’t put it down.  I like Marin and Griffin’s chemistry and the story was filled with action.  This is the beginning of a series and I can’t wait to read the next book.
Posted by Janine at 11:42 AM