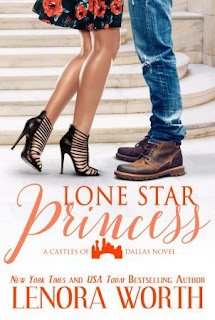 Annabelle Castle is a rebel without a cause…until her stepsister, the head of the glamorous Castle Department store, offers her the chance of a lifetime. Too bad the opportunity to finally play a role in the Castle’s future comes with strings attached—the man who gets under her skin.

Former cop Johnny Darrow is head of security for the Texas-based Castles. He excels at his job and nothing gets to him…except Annabelle. Even as he dragged Annabelle out of many public relations disasters with the paparazzi, he knew there was so much more to her than the headline-grabbing, rich girl. Now that she’s matured and determined to turn over a new leaf, he finds her irresistible. She’s smart, creative, and makes him feel things he hasn’t after a personal tragedy.

When Johnny’s assigned a job as Annabelle’s bodyguard, he must push his feelings aside. Can Johnny keep his focus to protect Annabelle or will his feelings for her put everything at risk?


Rebel of the Castle family, Annabelle, has finally grown up and is working at Castle Department Store and creating eye catching displays.  With a new store about to open, Annabelle’s step-sister, Eleanor, puts Annabelle in charge of designing it.  But she will need a bodyguard with her at all times as the press is still hungry for information about her mother, Caron’s arrest.  Head of security, and Annabelle’s crush, Johnny Darrow is asked to watch over Annabelle until the job is finished and the store opens.
Johnny doesn’t really want to work so close with Annabelle, but he will do it.  He knows he is the best person for the job.  He has had a thing for her for a long time, but he knew better than to act on it as she was his boss’s daughter.  He will have to keep his mind on the job and nothing else.  The more time Johnny and Annabelle spend together, the closer they both become.  Will they be able to keep it strictly business?

The chemistry between Annabelle and Johnny was intense. I loved how they joked with each other all the time but when they got serious, the conversations took a different tone making the book more interesting.  It was nice to see Annabelle finally grown up and no longer the party girl she was in the first book of this series.  I also liked the setting for the book.  Being in the Dallas area, it was easy to picture the places mentioned in the book.  I could relate to Annabelle’s job.  When I worked in retail, my dream was to do displays at stores and I did for a short while, but nothing to the extent of what Annabelle did.  So, it was fun to relive those dreams through this story.  All around, I thought it was a fun and enjoyable book.  But I would definitely recommend reading Undercover Princess first to get the background on the characters in this book.
Posted by Janine at 5:00 AM