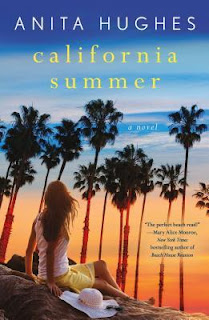 Anita Hughes's California Summer is a charming and beautiful love story about a former Hollywood producer who trades her cast list in for cookbooks in the hopes of following her dreams and finding new love.

Ben and Rosie are Hollywood’s newest director/producer dream team. After hitting it big at Sundance, it seems that their ten years of love and hard work are finally paying off. Rosie is happy making independent films, but Ben wants the A-List celebrity package: a house in Beverly Hills, fancy cars in the driveway, and his name on the biggest blockbusters. He’s willing to do anything, even sleep with the most famous producer in town, to get them.

Rosie is devastated by Ben’s affair, and she decides to take a break from show business. She accepts her best friend's invitation to spend the summer at her parents' estate in Montecito. It's far away from L.A., the perfect place to start over.

In Montecito, Rosie meets a colorful cast of characters including Rachel, who owns a chocolate store, and Josh, a handsome local who splits his time between surfing and classic cars. Suddenly Rosie has new friends and a new purpose. She starts a business in the village, and her luck seems to be turning around. But Rosie knows all too well that success comes with a price, and the price might be losing love...again.

California Summer is a touching and romantic story about following your dreams but not letting them get in the way of love.


An engaging story about friendships and starting over.

After ten years together, Rosie Keller leaves her cheating boyfriend, film career and the rat race of Hollywood behind. She starts her life over in the Montecito guest house of her best friend Angelica’s parents where she is inspired by Angelica’s mother, Estelle, to find a new dream and to go for it. Rosie has the best recipe for fish tacos and guacamole and is encouraged to open her own restaurant. Rosie’s Fish Tacos is born and becomes a huge success.

Rosie also finds a new love interest, Josh, a surfer and car enthusiast. But after the way her last relationship ended, Rosie is afraid to get too close. Josh fears Rosie will miss her old life and leave at any time. Josh has his own reasons for disliking the whole Hollywood scene. Lots of things get in the way of Rosie and Josh’s new romance, including Angelica who spews a secret without knowing all of the facts which sends Josh running once again.

I really enjoyed this book. The story was addictive, like reading a gossip magazine, not knowing what is fact or fiction because the characters have so many secrets. Along with Rosie and Josh, I also felt drawn to Estelle and the butler Morris, who became more of a best friend to Rosie than Angelica was. This is one of those books that you will want to read again and again. It’s a perfect book to take on vacation and read on the beach.

*Thank you to St Martin’s Press and NetGalley for an ARC of this book for an honest review.
Posted by Janine at 5:00 AM