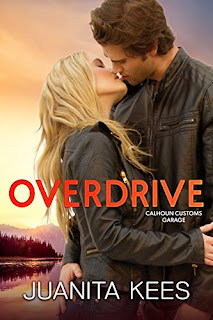 Chase Calhoun has worked hard at making Calhoun Customs a world-wide sensation and keeping his father’s dream alive. He hasn’t had time to think about settling down, so he’s not expecting to find love or new life in their garage amongst the ghosts of his family’s past.

Charlotte Jackson is on the run from a rebellious past, determined to prove she can be a good mom to three-month-old baby, Zoe. Tired of being delegated to the back office of the racing team her famous NASCAR family owns, she sets out to establish herself as a custom design artist. But her past soon threatens her future and everything she’s worked hard to build is challenged.

While Chase slowly loses his heart, Charlotte learns that sometimes family is more than just blood and DNA.

Single mom, Charlotte “Charlie” Jackson, is on the run from her father because he wants to put her baby up for adoption.  He doesn’t want any more scandal from his rebellious daughter, especially about being an unwed mother.  Charlie’s brother, Ronan, is a NASCAR driver and her father wants all of the attention on his son.  Charlie soon finds herself in Bigfork, Montana in hopes to land a job as a graphic design artist at Calhoun Customs.

Chase Calhoun was instantly attracted to Charlie the first time he saw her but he had no idea she was living out of her car and sneaking into his shop at night to sleep in the attic.  When he found Charlie and baby Zoe asleep in the attic, he decided he had to do something.  Chase took them home and then gave Charlie a job.  The last thing he expected was to find out was who she really was, the daughter of one of his father’s racing rivals from back in his NASCAR days.  And he definitely didn’t except to find himself falling in love with Charlie.

I really enjoyed this book with the background of racing and a custom car shop.  It was a little different than the books I have been reading lately.  Though it is romance, the story line was more unique and had a lot of excitement and family drama.  I couldn’t help getting attached to some of the secondary characters as well and can’t wait to find out more about them in the upcoming books in this series.