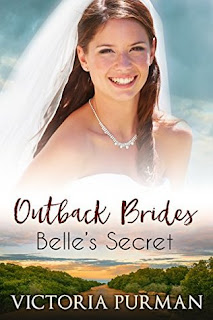 A year later, Harry Harrison’s bride is still a mystery. Who was she? Where was she? And why did she run? When Harry flies to a Australia for his best friend's wedding, he runs straight into the woman he’s never been able to forget.

All she asks is for their marriage to be kept a secret. All he asks is for a divorce. But after a week together, Harry and Isabella are forced to face what they really want.

Isabella Martenson had been keeping a secret for the last year.  Not even her best friend knew it.  Isabella married a man when she was in Las Vegas for a convention and then panicked and ran.  She went back to Australia and moved hoping Harry would never find her.  Things are going good for Isabella now.  She is running her own business, Wedding Belles, and officiating weddings at her best friend Maggie’s wedding venue.  But when one of her wedding guests turns out to be her husband, Isabella doesn’t know how to react.

Harry Harrison, a well-known wine maker from San Francisco, is a guest at his friend’s weddings when he spots Belle, the woman who disappeared after they were married.  Since then he has been searching for her.  He just wants a divorce so he can move on with his life.  But when circumstances put the two of them together, they both might decide they want a second chance.

This was a sweet story.  The situation was a bit unbelievable, but it made for a fun read.  I cheered on Isabella and Harry the entire time.  I wanted them to stay together.  The author kept the story interesting and enjoyable.