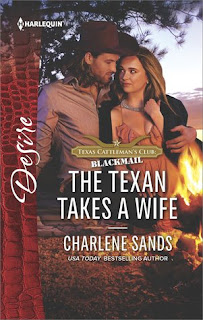 A temporary tryst with a sexy Texan...no problem, right?
All it takes is a daring out-of-character ride on a mechanical bull to send Erin Sinclair straight into the arms of one fine-looking cowboy. With Royal, Texas, on edge over the criminal targeting their secrets, she needs to blow off steam. Dan Hunt is happy to give the ex-nanny the time of her life, but the rich rancher insists he doesn't do relationships. With Erin leaving Royal in a matter of weeks, why not have a no-strings affair? Even if it feels like it could be the commitment of a lifetime...


A fall off a mechanical bull brings Erin Sinclair and Dan Hunt together.  But it's working together while trying to find Maverick, the person responsible for distributing inappropriate pictures of members of the Texas Cattlemen's Club, is when things really heat up.  Erin knows she shouldn't fall for Dan as she plans on going back to her life in Seattle soon.  And it becomes even more difficult as she spends more time with Dan.

Dan hasn't found a woman who sparked his interest in a long time and Erin has just broke that dry spell and it left him feeling conflicted.  Dan didn't do long term relationships, but being with Erin is making him want to change his ways.  When Erin is needed at her new job in Seattle sooner than she expected, Dan doesn't take the news very well.  When he sets his goal to get Erin back, nothing will stop him.

I wasn’t ready to say goodbye to Erin and Dan when the story ended.  I wish the book was longer.  But I am sure we will hear more about them in the next book.  The way they met was fun and unexpected.  I would have been totally embarrassed falling off the mechanical bull and wouldn’t be able to face anyone afterwards.  But it was a great introduction for them and even more interesting once Erin found out Dan was her friend’s brother.  The story moved along quickly but didn’t miss any details.  I was especially happy to see Dan was an animal rescuer.  I knew he was going to be one of the good guys when he helped the injured dog after getting hit by a car.  This is a good book for anyone who loves cowboys, animals and hot romance.
Posted by Janine at 8:35 AM