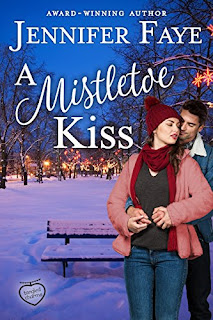 Jaded by love, Suzanna Simms has resigned herself to focusing on her art business. But with Christmas quickly approaching, she receives word that her family is returning to Marietta. And Suzanna failed to mention that her latest relationship had ended abruptly. Now she’ll have to admit to her family that she failed at love—again.

Enter Sergeant Jake Hamilton, a new resident to Marietta and Suzanna’s next door neighbor. He's not looking for anything permanent, he's just passing through Marietta for the Christmas season, hoping to keep to himself. But when Suzanna's family mistakenly assumes that Jake's her boyfriend, he agrees to continue the charade.

Suzanna is certain she's immune to his rugged good looks and sexy smile until they find themselves standing under the mistletoe. When Jake finds her kiss sweeter than her sugar cookies, he knows he's in trouble. But it's too late by then... the Christmas charade is on.


This was such a fun story.  Suzanna Simms has given up on love.  But, when she finds out her family is coming to town for Christmas, she is in a panic as to what to so.  She doesn’t want her family pitying her after another breakup.  Everyone in Marietta remembers when Suzanna was dumped on her wedding day.

Sergeant Jake Hamilton is in Marietta to help out on of his friends after he is discharged from the army because of an injury.  He is staying in the rental next to Suzanna and they become friends pretty quick.  So, when Suzanna’s parents show up early for Christmas and assume he is her new boyfriend, Jake plays along.  Things soon get out of control and they find themselves with feelings neither of them expected.  But, Suzanna worries as Jake mentioned after Christmas, he would be leaving town.  Should she really get involved with someone who is going to be moving on so soon?

I really enjoyed this book.  There is so much more to the story than just romance.  There is family fun, learning to trust in love again and Suzanna’s fear of dogs.  Jake has a Saint Bernard named Rufus and Suzanna is terrified of him at first, but eventually learns to trust him.  I could relate to this part because I also have a fear of dogs after being bit on the face when I was a little kid.  And ironically, it was a Saint Bernard.  I think Rufus and Suzanna’s cat Pixie made for fun reading with their silly antics.  I would recommend this book to anyone who loves a good clean romantic comedy.
Posted by Janine at 4:06 PM