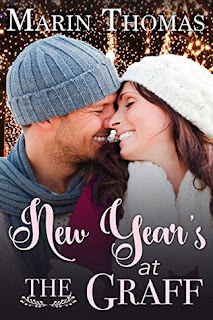 After being banned from celebrating the holidays with his stepfamily, San Diego businessman Lucas Kendrick arrives in Marietta, Montana, in time to attend the New Year’s Eve celebration at the Graff Hotel. The rodeo-theme party isn’t his style but he’s drawn to the pretty cowgirl running the dice table. When the clock strikes midnight and they ring in the New Year with a kiss, Lucas almost forgets he’s in Marietta on business and not pleasure. He believes he’s found the perfect property for his prized client. There’s just one problem—the pretty cowgirl has her sights set on the same piece of real estate.

Now that single mom Ava Moore has earned a business degree, she wants to help other struggling women get back on their feet by opening a co-op on Main Street. The last thing she expects is competition from the handsome city slicker whose New Year’s kiss she hasn’t been able to forget. Lucas isn’t only stealing Ava’s heart he’s bonding with her daughter. Can Ava convince Lucas that the best business deals are made with the heart and not money?

An inspiring and heartfelt story.

Lucas Kendrick and Ava Moore met at The Big Sky Mavericks Ball at the Graff Hotel on New Year’s Eve where Ava is working.  Lucas was in town to fulfill his mother’s wishes after she passed away.  She wanted to thank the people in Marietta who helped her when she needed it most.  He was also combining the trip with business to prove to his father he was serious about his job.

Ava is a hard working single mother who works as a maid at the Graff but her real dream is to run a co-op to help other single mothers further their education.  She has finally found a place where she wants the co-op.  Then she finds out Lucas is also interested in the same property.  This causes a little friction in the newly found relationship.  But, there is another force working behind the scenes which won’t allow anything to come between Ava and Lucas.

I was easily hooked on this book.  I enjoyed the parts where Lucas found his mother’s old friends and how he thanked them.  I liked how Lucas and Ava’s backgrounds were woven into the story.  It was plotted out very well.  Ava's daughter really added to the story too.  I couldn't help but love her.  But the real surprise was a secret Ava’s mother-in-law kept.  I would love to learn more about her and her psychic abilities.