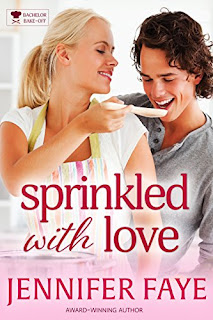 What does one do with a matchmaking cat named Romeo?

Spirited and beautiful, Jillian Parker is one of Marietta’s newest business owners. Still, her mother worries about Jillian’s bare ring finger. So in order to give her mother something else to fuss over, Jillian adopts a cat named Romeo. He turns out to be anything but a docile lap cat.

One snowy night, Romeo makes a break for it. With Jillian right on his heels, they have a near miss with a passing pickup driven by Avery Wainwright, one of Jillian’s closest friends. A rodeo accident has the sexy cowboy returning home to recuperate, and he’s not happy about it.

So when Avery finds himself lassoed into the Bachelor Bake-Off, he turns to the one person who has always helped him out—Jillian. But will teaching him to take chances outside of the show ring have them both discovering that their feelings for each other run much deeper than they ever imagined?

A sweet romance with a mischievous cat that has a way of bringing people together.

Jillian Parker always had a thing for Avery Wainwright, but never let him know.  Now that he is back in town, she can't get her mind off him.  And it was all because her mother's spoiled cat Romeo decided to take off running when she opened the door.  He ran right out onto the icy road where Jillian nearly got hit by a truck that Avery was driving.

Avery was back in Marietta to recuperate from an injury he got while in a rodeo.  But the first thing he did when he got to town was almost hit someone standing in the middle of the road.  When he saw it was Jillian, he couldn't believe his eyes.  She had gotten even more beautiful since the last time he had seen her.

When Avery's sister informs him, she has signed him up for the Bachelor Bake-Off, Avery decides he needs help learning to bake.  He asks Jillian to teach him because he knows she can bake.  When they get together for Avery's baking lessons, Avery is tempted to make a move on Jillian, but Jillian keeps pulling away.  Will Avery ever be able to get Jillian to see him as more than just a friend?

I thoroughly enjoyed Jillian and Avery's story. Romeo was a cute addition to the story as well.    This is another great addition to the Bachelor Bake-Off series.
Posted by Janine at 12:32 PM