The Things We Keep by Sally Hepworth - Review 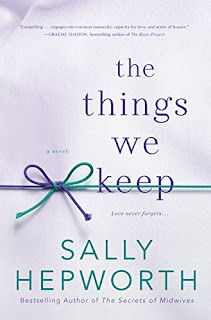 Anna Forster is only thirty-eight years old, but her mind is slowly slipping away from her. Armed only with her keen wit and sharp-eyed determination, she knows that her family is doing what they believe to be best when they take her to Rosalind House, an assisted living facility. But Anna has a secret: she does not plan on staying. She also knows there's just one another resident who is her age, Luke. What she does not expect is the love that blossoms between her and Luke even as she resists her new life. As her disease steals more and more of her memory, Anna fights to hold on to what she knows, including her relationship with Luke.

Eve Bennett, suddenly thrust into the role of single mother to her bright and vivacious seven-year-old daughter, finds herself putting her culinary training to use at Rosalind house. When she meets Anna and Luke, she is moved by the bond the pair has forged. But when a tragic incident leads Anna's and Luke's families to separate them, Eve finds herself questioning what she is willing to risk to help them. Eve has her own secrets, and her own desperate circumstances that raise the stakes even higher.


A thought provoking and emotional tale that pulls you in from the very start.

The Things We Keep is told from three different points of view, Anna, Eve and Clementine.

Anna is in her late 30s when she is diagnosed with Alzheimer’s and is sent to live at Rosalind House, an assisted living facility.  While Anna struggles with the frustration of losing her memory as the disease progresses, she finds a friend, Luke who also has early-onset Alzheimer’s.  Together they form a bond that is inseparable.  No one believed people with Alzheimer’s could actually fall in love.  But Anna and Luke prove them wrong.

Eve is a new employee at Rosalind House.  She recently lost her husband after a scandal that leaves all of the people she knows hating her.  She loses everything she had and takes a job at Rosalind House to support herself and her daughter.  There she meets Angus, the gardener who always seems to be around when she needs someone the most.  Will Eve be able to open up enough to allow love into her life again?

Clementine is Eve’s young daughter who is having the hardest time of all.  She struggles in school with her friends and the kids who say mean things about her father.  She soon spirals out of control.  But with the help of her mom, a therapist and the residents at Rosalind House she is able to accept some of the truth.

Each character in the book has a special place in the story and it was interesting to see where they all fit in it.  I admit I didn’t know a lot about Alzheimer’s until I had a good friend with a father who had it.  Hearing her talk about how this debilitating disease is and how it takes over one’s life was heartbreaking.  I didn’t know anything about early-onset Alzheimer’s and after reading it from Anna’s point of view it really opened my eyes even more about this disease.  I thoroughly enjoyed this book and highly recommend it to anyone who has been effected by Alzheimer’s, just curious about it, or if you are just looking for a different kind of love story.

This quote in the book was the perfect tie in to the story and something I will not forget.
“You don’t waste time with regrets.  In the end, you just remember the moments of joy.  When all is said and done, those are the things you keep.”