Escape to the Riviera by Jules Wake - Review 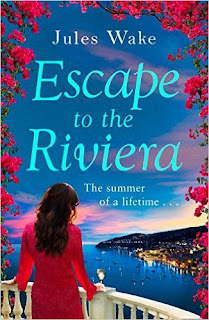 **Lose yourself in the south of France this summer in this fabulously feel-good beach read!**

Carrie Hayes has a job she enjoys and a perfectly nice boyfriend. She’s sorted. Isn’t she?

But Carrie’s life wasn’t always like this. As a young,
wild drama student, she married fellow actor, Richard
Maddox, after a whirlwind romance. Life back then was
full of possibilities, but when Hollywood beckoned
Richard, Carrie was left behind.

Now an A-list superstar, Richard’s life couldn’t be more
different to Carrie’s, so when their paths cross in glamorous
St Tropez, she can’t help but wonder what might have been.

But with lovely, sensible Alan in tow, Carrie knows
she needs to do the right thing. The only problem is,
Carrie and Richard never quite got round to getting a divorce…

In the light of her recent engagement, Carrie Hayes must face her past and the fact that she is still married to the popular Hollywood actor Richard Maddox.  Only Carrie's sister Angela knows she is married and spills the beans to Carrie's that her boyfriend planning to propose.  This sets Carrie in motion to find Richard and do what is long overdue, end the marriage.

It was fate when Angela is offered the use of an estate in Côte D’Azure where Richard just happens to be filming his latest movie.  Carrie uses this opportunity to seek out the filming locations to find Richard.  After eight years of separation, it's time for a divorce.  But apparently Richard is still in love with Carrie and won’t give up that easy.  He gives her an ultimatum, spend two weeks with him and if she still wants a divorce after that, he will give it to her.  Their time together brings back a lot of memories for Carrie and she realizes she is still in love with Richard and their story isn't over yet.

I really enjoy a good book that takes me on a journey to some exotic location.   Add this incredible story to that journey and I didn't want this book to end.   I admit it was the cover that got my attention first, but when I read the synopsis, I was intrigued and had to know what happens.  This book is a perfect addition to your summer reading list.