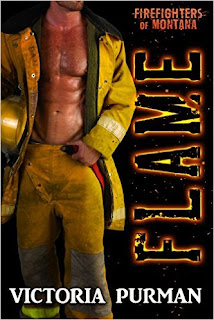 Cady Adams has had a crush on Dex McCoy since high school, but her ambitions were always bigger than the small Montana town they grew up in. In the years after, Cady headed to California and Dex ended up drifting from one job to another all over the US.

But when the rug is pulled from under her feet, Cady comes home to establish her business, Cady’s Cakes. What she doesn't know is a family tragedy has pulled Dex home, too, and he's taken a new job as a smokejumper.

Will they finally give in to what’s been burning between them for so long? Is the timing right to find out the dreamer and the drifter are really perfect for each other?

When Cady Adams returns to Glacier Creek, she has no idea her high school crush Dex McCoy has returned as well.  In the past, their timing was never right.  They both had plans of leaving Montana as soon as they could.

After school, Cady moved to California to go to culinary school.  She is home again and has established her own bakery, Cady's Cakes.

Dex spent his years traveling from one place to the next taking on different jobs. He is now back home and found working as a smokejumper is his calling.

Now that Cady and Dex are both in the same town again, will they finally get their happily ever after?

This book was very well detailed and you could tell the author did a lot of research to make the story believable.  I hate to see this series come to an end.