Every Breath You Take by Christina Phillips - Review 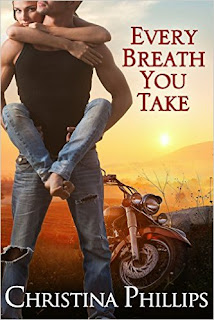 She’s the one girl this bad boy could never have…

It was only supposed to be a forbidden one night stand with the bad boy she’d never forgotten, but Piper Thomas soon discovers it takes more than sizzling sex to scorch her teenage fantasies. The more he gives, the more she needs…

It’s been five years since Mason Hunter’s brother died, and he’s tried to put the guilt behind him. But when Piper, the girl his brother should’ve married, reappears in his life and offers him the one thing he’s always craved – one steamy night in her arms – he can’t resist.

Piper’s the only woman he’s ever wanted, but how can they have a future together when the past haunts every breath they take?


A forbidden one night stand with her high school crush turns into something Piper Thomas never imagined possible.

Piper was once engaged to Mason Hunter’s brother Colton, who died in a motorcycle accident five years ago.  She blames herself for Colton’s death because they broke up that night.  Mason blames himself for letting Colton take his bike knowing he had never been on one before.

Every year Colton’s parents have a get together with Piper on the anniversary of Colton’s death.  Mason has never been present for these get togethers, but this time he was.   Old thoughts and feelings are brought back to Piper.  Mason was her first crush.  Mason had been attracted to Piper since he first saw her, but she was off limits as she was his brother’s girlfriend.  When Piper was leaving the Hunter’s house she finds her car with a flat tire.  Mason is there to give her a ride home and offers to fix her car for her.  What begins as a ride home ends up being so much more.  The weeks that follow become something neither of them had ever imagined.

A great story with likable characters and a good storyline made this book fun and quick to read.  Be sure to have a cool drink by your side as the intimate scenes are very realistic.