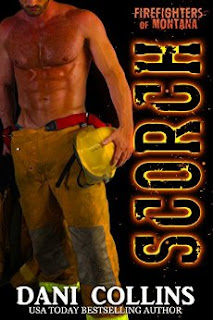 Jacqui Edwards is back in Glacier Creek to wrap up loose ends after the death of her husband, Russ, captain of a group of daring, talented smokejumpers. She wants to stay and reboot her life, but faces an uphill battle shedding the role of the captain’s fragile, grieving widow.

After growing up in foster care, Vin Kingston finally found a family when he joined the smokejumpers. Then, six months ago, his best friend and captain died in a freak jump accident right before his eyes. Vin is consumed with guilt and determined to watch over Russ’ widow. No easy task when the vibrant, beautiful Jacqui is busting out of her shell and challenging Vin’s vow to keep her off limits.

In a small town where everyone knows everyone else's business, how will two people who are starting their lives over move past the gossip and rumors to find happily ever after?


After the death of her husband, Jacqui Edwards tried to move on with her life in Florida.  After she returned to Montana to pack her belongings and sell the house, she decided she just can't leave.  This did not go over so well with Vincent Kingston, who was in the process of fixing up the house and had already planned on buying it.  Vin had been living with Jacqui and her husband Russ before Russ's tragic death.  Vin and Russ were best friends and worked together as fire fighters and Vin still had a hard time coming to terms with how Russ died.

Vin knew Jacqui was off limits.  But he was having a hard time fighting the attraction that grew stronger with each day that they spent together under the same roof.  Jacqui had never been with another man except for her husband, so the feelings she had towards Vin were all new and she really didn't know how to go about moving on with him.  When she finally gave in, it was well worth the wait.

I enjoyed this story quite a bit. The characters were written really well and the story was very descriptive.  I can't wait for more Firefighters of Montana books.