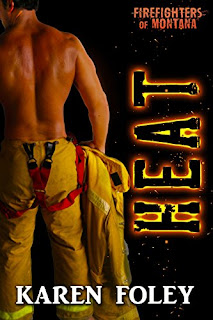 Callie McClain is back in Montana after a twelve year absence to care for her ailing father, despite the fact she can’t stand the cold and isolation. But in an ironic twist of fate, it seems Montana is finally giving her what she wants—blistering heat and a fiery glow that threatens to incinerate everything in its path. Wildfire. The only thing hotter than the advancing flames is the smokejumper who comes to her rescue, and suddenly Callie is finding reasons why Montana might just have everything she’s ever wanted.

Tyler Dodson can’t recall a time when he didn’t want to be a smokejumper. There’s nothing as dangerous—or as exhilarating—as jumping, until he rescues a pretty veterinarian from an advancing wildfire. He knows he shouldn’t get involved. He doesn’t need that kind of complication in his life, and distractions of any kind can be deadly in his line of work. So why can’t he keep his mind – and his hands – off of Callie McClain?

An exciting and emotionally charged story.

Callie McClain has returned to Montana to help care for her father.  She really doesn’t want to be there. She would rather have her father return to California with her.  When a fire threatens their safety, it is Tyler Dodson who rescues them.

Tyler lived for his job.  He always wanted to be a smokejumper.  He lived for the danger and excitement of the job.  He doesn’t have room for a woman in his life, but he can’t get Callie out of his mind.

Sparks fly between Callie and Tyler, but Tyler knows they can’t have anything permanent with Callie living in California.  How will they make this relationship work?

This is another wonderful addition to the Firefighter of Montana series.  I really liked the chemistry between Callie and Tyler.  The story line was interesting and entertaining and kept my interest all the way to the very end.
Posted by Janine at 8:00 AM