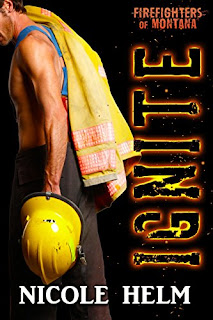 Lina McArthur has spent her life in Marietta, Montana, in the shadow of her doctor father. But now that she’s finally broken free and moved away, she is determined to figure out who she is out of her scrubs. Then she meets the first man to ever tempt her to let him take them off…

Dean “Ace” Clark has been on the run from a troubled and tragic past. When a work-related injury sends the smoke jumper to the hospital, his wounds are tended by the beautiful Dr. McArthur. Just one problem. He knows the McArthur name, and she’s connected to the past he desperately wants to stay one step ahead of.

Ace has never been afraid to jump into a dangerous situation, but falling for Lina might just be the biggest leap of courage he’s ever faced...

When Dean "Ace" Clark ends up in Kalispell Hospital's emergency room after a jump goes wrong, he discovers the doctor to be none other than his sister's best friend Lina McArthur.   He couldn’t let Lina know who he really is.  He didn’t want to interfere with his sister’s life.  Ten years ago, Ace left Marietta and never looked back.  He wanted Jess to have a good life without his troubled past overshadowing her.  He has created a whole new life for himself including a new background and he wasn’t going to let anyone know his secret.

Lina was tired of living in her father’s shadow.  When it was time to break free, she moved to Kalispell where she could figure out who she really was.  The day Lina has a patient with her best friend’s last name, it sets her mind racing.  What if this was Jess’s long lost brother?  She was almost positive Ace really was Dean and she will do anything to find the truth.  But one thing Lina didn't expect was how hard she would fall for the sexy smoke jumper.

This is a fast paced book with a great storyline and interesting characters.  It is a wonderful addition to the Firefighters of Montana series.