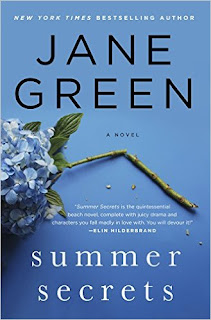 With Summer Secrets Jane Green has reached an even deeper level of emotion that will stay with you long after you turn the last page...
Living in London in her twenties, Cat had it all--a great job and wonderful friends. But with the good came the bad--a party every night, wreaking havoc, and blackouts. When she discovers the father she never knew she had, living in Nantucket, it sends her into a spiral, costing her the new family she had desperately craved. The drinking had always been a constant evil in Cat's life. Now in her late thirties, sober, divorced from the love of her life, and trying to make up for lost time with her teenage daughter, she's ready to make amends to those she has hurt. But facing the past and the unthinkable act she committed one summer night could change the course of her life forever.

A must read book.

An emotional story of a recovering alcoholic, Cat has lived a life that she doesn’t often remember when she is drinking.  Cat and all of her friends used to enjoy going out after work for drinks.  But Cat can’t stop at just one drink.  Often this lead to nights spent with different men and mornings filled with regret and hangovers.

When Cat’s mother drops the bomb on her about her biological father, she sets off from London to the island of Nantucket to meet her father and sisters.  Things don’t go as planned.  Her father is great, but he also drinks too much.  She gets along with one sister, but the other doesn’t want anything to do with her.  Things really change when Cat gets drunk one night.  She is sent home and not to return.

When Cat meets Jason, he is the one to convince her to get help.  She stays sober until her daughter Annie is born.  When the drinking begins again, Cat spirals out of control and this time it’s worse than ever.

When Cat finally seeks help again, she wants to go back to Nantucket to make amends with her sisters.  Will they accept her apology or has the damage already been done?

A friend recommended this book and said it would speak to me.  Boy was she right.

There are so many parts that I could totally relate to which kept me reading late into the night.  It is a wonderful story of family relationships and love and loss with the beautiful island of Nantucket thrown in.

Thank you to Melissa Amster at Chick Lit Central for the recommendation!