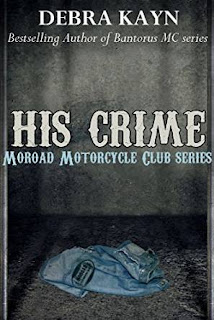 Cam's obsessive hold on Christina erupts in a mind-blowing conclusion...

President of Moroad Motorcycle club and career criminal, Cam Farrell gets a second chance at life. He promises to keep Christina at his side and bring his son home alive. But, when new secrets come out and club business sparks a war, Cam must learn that family comes first or risk losing control of his club, his MC brothers in prison, his woman.

Nothing is black or white. Sometimes bad people win.

Determined to make sure Cam stays alive and Jeremy comes home, Christina Nickelson stands up against Cam, the club, and society. At her lowest, she's willing to fight dirty to make sure her unconventional family stays together. Even at the risk of losing Cam's love.

A wild ride and a mix of emotions.  This story will stick with you long after you read it.

Just when you thought a book series was good, along comes book three of The Moroad MC.  This one will really blow you away.

President of the Moroad MC, Cam Farrell has lived a rough life and lives by his own rules.  He doesn’t care what anyone thinks and does as he pleases.  He is also very loyal and will do anything to protect his club and his family.  Christina and Jeremy have become his life and he will keep them safe no matter what it takes.

Cam is finally home from the hospital and recovering after being shot by Merk, the VP of the club.   Merk is now in prison and Christina can finally relax and not have so many worries about Cam.  Or does she still have something to worry about?  Jeremy is still on the run and the club is searching for him.   No one leaves the club alive.  Once you’re in, you’re in for life.  When they finally find Jeremy, what will happen to him?

Christina has been alone since her parents were murdered.  She was forced to grow up fast and learned to survive on her own.  When she started writing to Cam in prison, she had no idea he would change her life when he got out.  Now she feels she has a family again and doesn’t want that to change.  Though Cam can be stubborn at times, she still loves him and will do as he says.  She is very close to Jeremy because he was one of her cases when she was a social worker.  When he runs away, she fears for his life because of Moroad’s rules.  How will she be able to protect Jeremy once he is home again?

Lots of twists and turns in this book will keep you glued to the pages.  It all comes to an end with a conclusion that you would never expect.

If you haven’t read the first two books in the series, Wrapped Around Him and For Life, I would suggest reading them first so you know what is going on in this book.
Posted by Janine at 9:04 PM