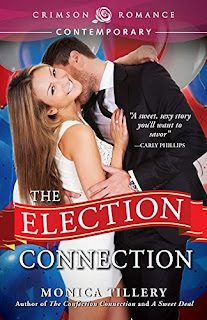 Model Lily Ashton's picture-perfect life isn't as flawless as it seems. After losing her soldier husband six years ago, Lily's carved a new life for herself by starting a nonprofit for war widows. There's no room in her busy schedule, or her heart, for a new love - which makes her the perfect date at fundraisers and parties for her pal, Congressman Ford Richardson.
Ford is focused on winning his bid for re-election, and when his opponent pummels him in the polls because he's not married, Ford's advisors give him a choice: find a fiancée or prepare to lose the election. Lily agrees to play the part, and they both vow to separate the election from their emotions. As they work together to keep their secret safe, their not-quite engagement starts to feel much more real than either is ready to admit.
With Lily's help, Ford may win the election, but can he win her heart?


In the world of politics, things aren’t always as they appear.  Or are they?

In an attempt to boost the confidence of his voters, Congressman Ford Richardson needs a wife.  His opponent is using his family to gain more voters and says Ford doesn’t know anything about family values because he is single.  Instead of using one of the women his advisors have selected for him, he decides to ask Lily Ashton, the lady he has been dating, to be his fake fiancé.

Widowed at 21, Lily has been working hard to get her non-profit organization, Soldier On, off the ground.  She wants to help other military widows through the difficult times after losing their husbands.  Lily agrees to the fake engagement and thinks it might even benefit her foundation if she can get the support of someone like Ford.

After Lily and her father appear on a local talk show, Ford’s advisors and parents think Lily is not the right woman for him.  He needs to end the relationship before it ruins his political career.

Will Lily and Ford be able to work through all the differences in order to make a true love connection?

This was a fabulously written tale which flowed easily off the pages and kept my attention until the very end.
Posted by Janine at 7:49 AM