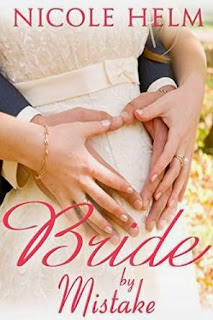 Wedding fever has hit the little town of Marietta…

And Kaitlin Shuller’s groom is marrying someone else.

Worst day ever. The man of her dreams is making vows to another woman. Her heart is broken, and all her carefully laid plans destroyed. Enter Beckett Larson, her older brother’s best friend and a very good bad decision.

Beckett has spent his life trying to outrun his bad reputation, but everyone already thinks the worst of him, so when Kaitlin offers herself to him — virginity and all— he just can’t say no.

But one night together has permanent consequences, and this time Beckett knows he can’t outrun his bad boy reputation. He’s determined to make Kaitlin his bride…even if he has to seduce her down the aisle.

A one night stand with a twist.

Kaitlin Shuller didn’t want to be at her sister’s wedding.  After all, she was marrying the man Kaitlin always dreamed about.  But it was happening and there was nothing she could do but accept it.

Beckett Larson was always the bad boy in school.  All the girls crushed on him.  Kaitlin was a good girl and she tried not to notice him even though he was her brother’s best friend.

The night of Sierra’s wedding, Kaitlin can’t stand it any longer.  She asks Beckett to take her away from there.  After a couple drinks at Grey’s Saloon, Kaitlin decides she is ready to shed her good girl image.  She wants Beckett in her bed.

One night of passion leads to more than they ever expected.  Kaitlin ends up pregnant.  How will work through this situation?  Will Beckett stay by Kaitlin’s side or leave town like he always does when things get tough?

This is a really good story.  Both characters were a bit stubborn so it was fun to see how they work through their differences.
Posted by Janine at 7:12 AM