Review: The Spirit of the Wolf (The Lost Clan #2) by Karen Kay 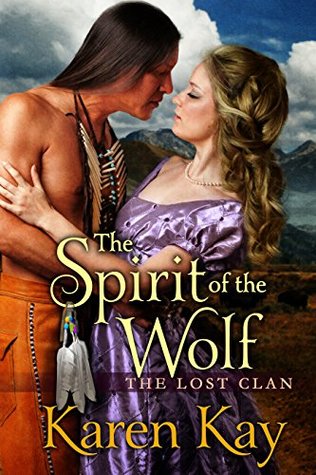 The end of a curse hides behind a riddle—and the final clue in the heart of a woman.

Grey Coyote stands on the knife edge of desperation. An ancient curse dooms his people to a half-life in the mists, neither living nor dead—unless he can solve a deceptively simple riddle. As time runs short, he’s sure the answer lies in beating a white trapper in a game of chance.

Among the trapper’s possessions, though, is a prize he never expected. A golden-haired woman as beautiful, delicate and stubborn as a prairie rose.

One moment Marietta Welsford is wondering how long it will take her hired guide to finish his game so she can hurry home to Rosemead, the English estate to which she hopes to lay claim. The next, she is abandoned with a man whose magnetism tugs at her body and soul, and makes her heart out-thunder the storm.

With so little time to lift the enchantment, Grey Coyote at first views Marietta as a trickster-sent distraction. But as sure as the star that guides him, it soon becomes clear she is the clue that could ultimately free his people…and capture his heart.

This story transported me to the time when it took place, the early 1830s.  Grey Coyote and Marietta’s story was an intriguing one.  I enjoyed seeing how they met and traveled across the land and eventually fell in love.  Grey Coyote was chosen to end an ancient curse that was put on his people.  Marietta was trying to get to St. Louis where she would get on a boat and start her journey to England to claim her family estate that was wrongfully taken away from her.

Personalities clash and things don’t go as planned, but Grey Wolf and Marietta eventually fall in love and it is such a memorable love story.  I learned a lot about Native American culture and a few words from this book.  It is a beautifully told romance.  I also liked the name Grey Coyote gave Marietta, Little Sunset.  And, who can resist this gorgeous cover?