Review: The Rancher Risks It All (The Tremaynes of Texas #2) by Debra Holt 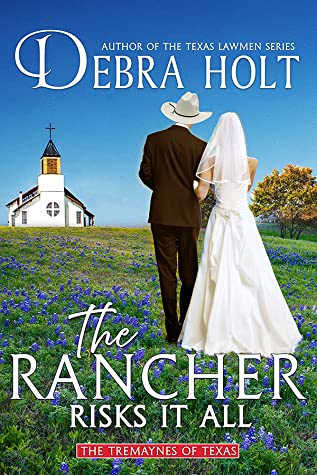 She’s on the run…

On a storm-ravaged night, Texas rancher Truitt Tremayne is trying to make it home before the road floods. Years ago he lost his parents, fiancée and youngest brother in a flash flood on the same country road, so it seems like déjà vu when he nearly hits a stranded car with a beautiful woman and her sister trapped inside.

Annie Sims and her sister Jessie are running from their past. She’s headed to San Antonio where they can disappear, but bad luck follows them. With her funds depleted and her car useless, Truitt’s offer of a temporary sanctuary with no questions asked seems too good to be true. Soon Annie finds herself falling under the spell of the kind, silent rancher. But can she let her guard down and still keep her sister safe, or is she courting more danger?

Truitt knows Annie has a secret. He wants her trust, but can he give his heart to another woman after he’s already lost so much?

Annie and her little sister, Jessie, were on the run.  They just needed to make it to San Antonio where they could start a new life.  But it did t work that way.  During a storm, their car ended up stuck in mud, on the side of the road, in the middle of nowhere.

Truitt was on his way home when he came upon a car on the side of the road.  Being the kindhearted guy he was, he stopped to help.  He ended up taking Annie and Jessie back to Four T Ranch, his family’s ranch, where they could sit out the storm and he could have Annie’s car repaired.  Annie and Jessie’s stay ended up being much longer than planned when Annie came down with the flu.  Annie and Truitt were good for each other.  Truitt was still holding onto something that happened in his past and Annie didn’t know who she could trust.  They both knew it couldn’t last.  Annie had to keep moving.  But just maybe, Truitt might be able to convince Annie to take up roots right there on the ranch with his family.

This book was so good and a great addition to the Tremaynes of Texas series.