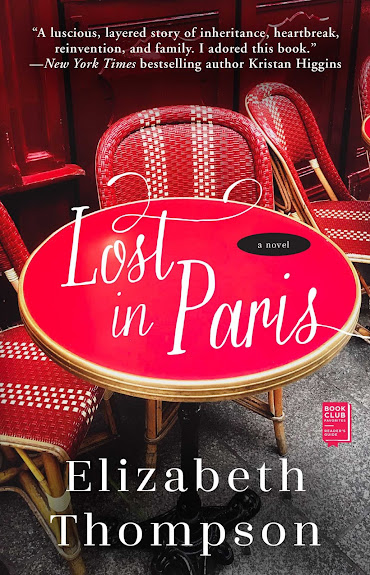 Hannah Bond has always been a bookworm, which is why she fled Florida—and her unstable, alcoholic mother—for a quiet life leading Jane Austen-themed tours through the British countryside. But on New Year’s Eve, everything comes crashing down when she arrives back at her London flat to find her mother, Marla, waiting for her.

Marla’s brought two things with her: a black eye from her ex-boyfriend and an envelope. Its contents? The deed to an apartment in Paris, an old key, and newspaper clippings about the death of a famous writer named Andres Armand. Hannah, wary of her mother’s motives, reluctantly agrees to accompany her to Paris, where against all odds, they discover great-grandma Ivy’s apartment frozen in 1940 and covered in dust.

Inside the apartment, Hannah and Marla discover mysterious clues about Ivy’s life—including a diary detailing evenings of drinking and dancing with Hemingway, the Fitzgeralds, and other iconic expats. Outside, they retrace her steps through the city in an attempt to understand why she went to such great lengths to hide her Paris identity from future generations.

A heartwarming and charming saga set in the City of Lights, Lost in Paris is an unforgettable celebration of family and the love between a mother and a daughter.

I couldn’t put this book down.

The discovery of a deed to an apartment in Paris reunites Hannah and her mother, Marla.  When Marla suddenly shows up in London, Hannah doesn’t know what to expect.  Marla always put her own life first and even left Hannah to be raised by her grandmother.  But Marla has news to share.  They are now the owners of apartment in Paris that belonged to Marla’s grandmother, Ivy.  Come to find out the apartment was basically a time capsule.  Nothing has been touched since Ivy left before the war.  What they discover inside is life changing.  Ivy lived her life to the fullest and knew some very famous people.

I enjoyed this book so much.  I had a hard time putting it down.  I liked the writer’s style of telling the story by switching between Ivy’s diary entries and the present day life of Hannah and Marla.  I enjoyed seeing them mend their relationship while they discovered one secret after another.  I wasn’t ready for the book to end.  I became attached to Hannah, Marla and Hannah’s friends.  I hope this story will continue in another book.  I feel there is so much more that can be told.

Thank you to Gallery Books and NetGalley for the ARC of this book in exchange for an honest review.