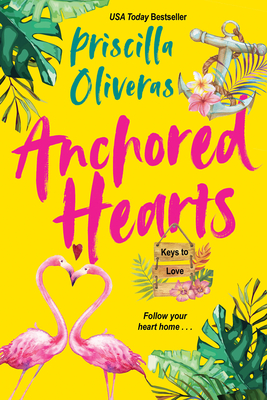 Award-winning photographer Alejandro Miranda hasn't been home to Key West in years--not since he left to explore broader horizons with his papi's warning echoing in his ears. He wouldn't be heading there now if it wasn't for an injury requiring months of recuperation. The drama of a prodigal son returning to his familia is bad enough, but coming home to the island paradise also means coming face to face with the girl he left behind--the one who was supposed to be by his side all along...

Anamaría Navarro was shattered when Alejandro took off without her. Traveling the world was their plan, not just his. But after her father's heart attack, there was no way she could leave--not even for the man she loved. Now ensconced in the family trade as a firefighter and paramedic, with a side hustle as a personal trainer, Anamaría is dismayed that just the sight of Alejandro is enough to rekindle the flame she's worked years to put out. And as motherly meddling pushes them together, the heat of their attraction only climbs higher. Can they learn to trust again, before the Key West sun sets on their chance at happiness?

I was excited to get my hands on this book as I loved Island Affair, the first book in this series.  This story is about Anamaria Navarro, a firefighter/personal trainer, who let her first love, Alejandro Miranda, leave to live his dream of being a photographer.  He traveled the world and became famous for his work.  An injury has brought Alejandro back home and Anamaria has been asked to help him with his recovery.  Being together again leads them to rekindle their relationship.  But, Anamaria knows Alejandro will leave the island when he is better, so she makes the best of their time together.  Will it be enough for Alejandro to change his mind and decide to remain close to home this time?

I really enjoyed this book.  I liked seeing how Anamaria and Alejandro rekindled their relationship after all the years that passed.  I also like catching up with the characters from the first book.  I learned a lot about Cuban culture, as the characters are both from big Cuban families.  The author’s descriptions about Key West made me feel like I was right there.  I would recommend this book to anyone who loves family drama, romance and a great tropical setting.