Review: Kiss Me in the Summer by Barbara Dunlop 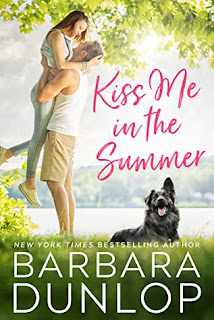 Can a lovable dog bring two opposites together?

Following an uproarious debacle with a client’s fussy pomsky dog, New York City lawyer Laila Arquette is forced to lay low in the picturesque town of Rutter’s Point on the coast of Maine. Pressed into helping handsome and compassionate veterinarian Josh Rowin with the town’s summer festival dog adoption fair, Laila hides both her fear of dogs and her growing attraction to Josh.

When Josh discovers Laila’s secret, he and Butch, a big, scruffy mix-breed of a dog, are determined to cure her fear. Her feelings for Josh intensify while she forms a special bond with Butch.

But her newfound joy comes at a price – a choice between Josh and the career opportunity of a lifetime.

Attorney Laila Arquette finds herself in an unfortunate situation during an important meeting at the office and afterwards decides to take some time off until it all blows over.  She finds herself just outside of Rutter’s Point, Maine, when her car breaks down.  Laila befriends another attorney, Madeline, after she stops to help Laila on the side of the road.   Laila ends up working for Madeline at her law office in exchange for a room at her house.  But it was Madeline’s nephew, Josh, who Laila starts spending most of her time with.  Josh changes Laila’s life in so many ways that when it comes time for Laila to head back to New York City, she has second thoughts.  The small town of Rutter’s Point and its citizens, especially one dog loving veterinarian name Josh, just might be what Laila has been unknowingly looking all this time.

This book took me through a lot of emotions as Laila’s story played out.  Funny, sad, frustration, happiness and more, the author outlined them all so well that I had a really good feel of what Laila was going through.  I really liked Madeline too, she was a hoot.  She made me laugh with her crazy antics.  Josh had such a sweet and sensitive side, who wouldn’t fall for him?  If you’re looking for a fun romance, I would recommend this book.  Especially if you love dogs.