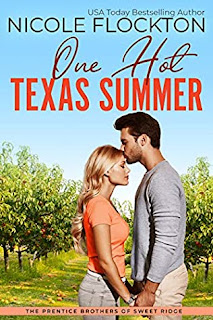 She’s been fooled before by sweet words and hot kisses

Kelly Turner loves being a florist, and being asked to take the lead on the new site for the town’s festival is an honor. If only she didn’t have to work closely with the town player, Tate Prentice. After being burned once by a serial cheater, her inconvenient attraction toward Tate needs to be nipped in the bud.

Tate Prentice’s focus is on ensuring his father recovers fully from his stroke and making sure the family’s peach farm continues to thrive. When his brother nominates the farm to be the satellite site for the festival, he’s less than impressed. The only good thing is he'll be working with Kelly – even though he knows she’ll never give him a second glance, not with his reputation.

The more time Kelly spends with Tate, the more she sees the man behind the reputation. Can she trust her instincts, or will her heart be broken once again?

This was a fun book about a florist, Kelly, who meets Tate, who runs his family’s peach farm after his father has a stroke, when he starts buying flower arrangements every week from Kelly’s shop.  The reason Tate buys the flowers will surprise you.  Then, Kelly and Tate are thrown together to work on their town’s founders day festival. As they work together, things start to heat up even though Kelly was afraid to get involved with another man, as her last relationship was such a disaster.  Plus, Tate is younger than she is and she is worried what the gossipmongers in town will say.  But when Kelly decides to follow her heart, there is no holding her back.

This is a fun new start of a new series and I can’t wait to learn more about Tate’s brothers and the women they will meet.  If you like small town romances with characters that have strong family ties and close friendships, you will enjoy this book.
Posted by Janine at 4:00 AM