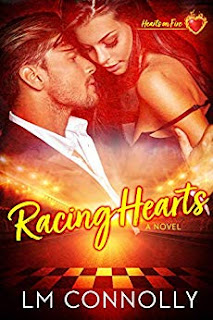 What starts as revenge soon flares to passion.

Italian race car tycoon Ronan Miller is on the cusp of achieving his elaborate revenge when he meets flame-haired back-up driver Georgia Trent. Intrigued by the beautiful and risk-loving beauty, he thinks he can use her as an instrument of his revenge, but after a spontaneous night of passion, he has other plans until fate knocks them both on a different track.

Georgia Trent has doggedly pursued a goal that has nothing to do with Mr. Tall, Dark, Seductive and Handsome. But one night she indulges her sensual, passionate and impulsive nature, never dreaming the consequences will be so permanent. Wanting to do the right thing, Georgia tracks down the elusive Ronan who’s disappeared after a family emergency.

Watching Georgia game her way into his office reminds him of all he’s been missing, but Ronan’s always been business before pleasure. But business won’t help him now. He is going to have to use all his seductive skills to woo Georgia back to his side, but has he waited too long?

A fast paced romance set in Italy among the world of luxury cars and racing.

Ronan Miller was in Monte Stefano during the big race.  But, he wasn’t just there to watch.  He was there to get even with his father for his mother and sister’s deaths.  Ronan had finally purchased enough shares to take control Bianchi Motors, his father’s luxury car company, and was about to drop that bomb on him.  When Ronan learned his father had set his eyes on Georgia Trent, the daughter of Team Trent’s owner and the only female driver in the race, Ronan decided he would make a move first.  Ronan and Georgia spent the night together and when Georgia shows up pregnant months later, he decides he will be a responsible father.  But Ronan also has another reason to marry Georgia.  He needs a positive image and reputation when he makes the announcement that he has taken over the family business. What could go wrong when they are both getting what they want?

I was excited to read this book and wasn’t disappointed.  There was a lot of action and drama in the story.  But sometimes, I just wanted to ask the characters what they were thinking when certain situations came up.  Even though Georgia was a virgin, she sure didn’t act like it the first time her and Ronan were together.  I did like her take charge attitude when she wanted to talk to Ronan and his office girls wouldn’t allow her near him.  Ronan was the typical alpha male in this story; strong willed and a bit stubborn. But, I did enjoy the story and seeing how they came to an agreement with their future in the end.  This book is the beginning of a new series and I look forward to reading the rest of the books in the series.