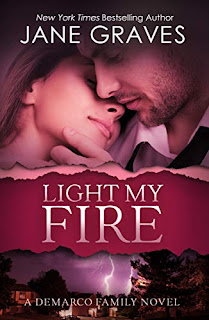 He was too hot to handle...and she couldn't resist the heat

Defense attorney Ethan Milner is well-paid for his ability to charm a jury while ruthlessly slashing the prosecution. He’s living life in the fast lane, until he’s slapped with a reckless driving charge and sentenced to 40 hours of community service on a crime watch patrol. Now he’s under the thumb of the chairman of the city’s crime watch council – a no-nonsense woman determined to make him pay his debt to society.

Sandy DeMarco is familiar with Ethan’s professional character, as well as his notorious “bad boy” reputation with women. Still, when her quiet neighborhood is shaken by a brutal murder and an employee of hers becomes the prime suspect, she knows the accused’s only hope is the man who will win at any cost. Working alongside Sandy, Ethan feels the spark of attraction that ignites into love – even as a killer burns to silence them both.

The DeMarco Family series continues up with Sandy’s story; and it’s definitely my favorite of the series.

Ethan Milner is bad news according to Sandy’s brothers.  He is a ruthless defense attorney who has set free some of the criminals that Sandy’s brothers have arrested.  But, what no one knows is Ethan doesn’t really like helping the bad guys.  It’s all about money at his father’s law firm.  It tears him up inside every time he wins a case and a guilty person walks just because they had enough money to pay for a good lawyer.

After a night of drinking and Ethan is arrested for reckless driving, he is sentenced to forty hours of community service.  He has to ride along with Sandy while she does her citizens on patrol in her neighborhood.  But, what neither of them expected was to come across a woman who had been murdered.  When one of Sandy’s employees, from her flower shop, is arrested for the crime, she will do anything to prove he is innocent.  Sandy asks Ethan to represent Josh and everything changes from there.  Ethan shows he does have a heart and Sandy starts to fall for him.  The story ends with a huge revelation of who the real murderer is.  All I can say is I didn’t see that coming.

I read this book really fast.  The story was exciting and I was on the edge of my chair the entire time.  The DeMarco Family books are the only ones by this author that I have read, but if the rest of her books are this good, I will definitely be on the lookout for more.   Each book in this series can be read as a stand-alone, so it doesn’t matter where you start in the series.  They are all really good and intense like this one.