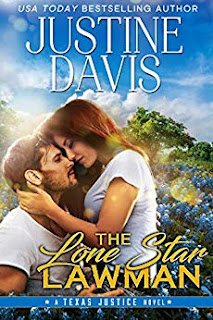 He never lets anything get to him. Except her.

Police Chief Shane Highwater has the respect of the entire town of Last Stand, Texas, and they all believe he was blameless when an accident several months ago ended one life and tore apart another. All except reporter Liliana Jones, who blames him for her fiancé’s death.

There's more to the story than she knows, secrets that might change her mind. Secrets Shane can't tell her. But oh, does he want to, because Lily Jones is the first woman he's been undeniably drawn to in a very long time.

When a tragedy in town throws them together, Lily is forced to admit Shane is everything everyone said he was and ignoring the growing attraction is near impossible, and she’s no longer sure she wants to. Has her change of heart come too late?

The Lone Star Lawman is an incredible start of a new series.  In this book we meet Police Chief Shane Highwater, who is highly respected by everyone in Last Stand, Texas, and reporter Lily Jones, who lost her husband in an accident and blames Shane for it.   Lily still holds a grudge against Shane, but a turn of events soon has Lily seeing Shane is one of the good guys.

This is an enemy to lovers romance with a lot of angst at first.  I liked the characters, plot and small town setting.  It was an easy book to follow along with.  Even though this book is part of a series, it can be read as a stand-alone.