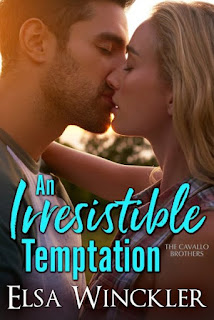 She has enough trouble in her life – she doesn’t need him to add more.

While school teacher Dana Roux is attracted to hotel tycoon David, she has no intention of ever acting on it. He’s way out of her league, and, as a former investigative journalist, David would soon discover the sordid scandal of her father’s incarceration and suicide.

David Cavallo quit his job as a reporter because he no longer had the stomach for it. Now he works with his brothers, enjoys life and especially enjoys flirting with women. Usually they reciprocate, but Dana steers clear even though he can tell she’s tempted. But at his brother’s wedding, they share a kiss that leaves him aching for more. Could Dana be the one? Before he can explore his feelings, he learns of his role in her father’s fall and suddenly his hoped for romance becomes complicated.

Will the past define their future?

From the day hotel tycoon David Cavallo met Dana Roux, he knew there was something special about her.  It wasn’t until years later when he finally made his move during his brother’s wedding.  From that moment, David couldn’t get Dana out of his mind.  But, Dana didn’t want a relationship.  Her life was a mess as it was.  She was still struggling with her father’s incarceration and suicide.  When David offers to help Dana find out the truth about what really happened, their togetherness leads them both down a path neither expected.  They were meant to be a couple and nothing and no one was going to stop them.

When I first picked up this book, I didn’t realize there would be a suspense part in it as well as the romance.  It was a pleasant surprise and kept me on the edge of my chair to find out what would happen next.  Lots of family dynamics, romance and excitement filled the pages.  The author did a great job creating interesting characters and a fun and exciting plot.  This book is part of a series, but each can be read as a stand-alone.