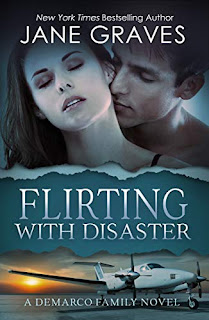 On a humanitarian mission to fly doctors to a remote village in Mexico, pilot Lisa Merrick discovers something sinister lurking behind the organization in charge. Her plane is sabotaged, leaving her trapped in the Mexican wilderness with a price on her head and no way out. Injured and desperate, she contacts the one man she knows will help her: Dave DeMarco, a tough but compassionate Texas cop with whom she was once wildly in love.

Dave DeMarco is stunned when a woman from his past calls him late one night with an incredible story of smuggling, sabotage and attempted murder. Soon, though, his mission to rescue Lisa becomes a struggle for survival against an enemy who wants them both dead. When the danger they face clashes with the passion that still burns between them, Dave vows to protect the woman he never stopped loving – and keep her in his life forever.

They shared one kiss in high school, but police officer Dave DeMarco never forgot Lisa Merrick.  So, when Dave got a call from Lisa saying she was in trouble and needed his help, Dave jumped on the next plane to a remote town in Mexico to help her.

Lisa was living her dream of being a pilot with her own private plane.  She flew doctors into Mexico so they could provide free healthcare to those we needed it.  But, her last trip was different.  She made a discovery that put her life in jeopardy and there was only one person she could trust to help her out; her old high school crush, Dave.

This was an adrenaline rush of a story.  Once the excitement started, it didn’t stop until the end.  I have been enjoying this author’s work.  Her writing style pulls me into the story right away and the action keeps me intrigued until the very end.  This book is part of a series but can be read on its own.  But, I would suggest you start at the beginning of the series so you can get to know the rest of the DeMarco family and not have any spoilers of other books by reading out of order.