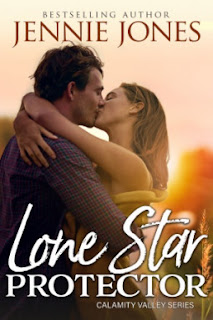 If you don’t fight for what you love, you won’t know what you’ve lost.

When Lauren Mackillop’s shady business partner gambles away her small business, she heads home to Surrender in Calamity Valley, Texas, to lick her wounds and plan her next move. But she walks straight into another battle to thwart a development company’s scheme to take over their charming Texas haven.

Determined to safeguard her town, her senses are on alert when the sexy stranger she flirted with while briefly stranded at LAX turns up as the new owner of the saloon. Something’s going on, and this time, Lauren isn’t going to give in without a fight.

Mark Sterrett has trouble on his heels and more on the way. To protect his family’s reputation from ruin he’s been tasked with ensuring this land deal goes through. But he’s up against more than he bargained for. Making his life more complicated, he’s drawn to the intriguing and enticing Lauren and as their attraction simmers and the threat to the town heightens, Mark wonders if he can get through the next two weeks with his conscience and his heart intact.

An imaginative and highly entertaining story.

It was no secret that all of the Mackillop women possessed mystical powers and that they were cursed.  But, was it possible to break the curse?  Lauren is about to find out when she returns to her hometown of Surrender, Texas, after her life fell apart in California.  Lauren was needed to help restore Surrender and prevent Donaldson’s Property Development from swooping in and buying up the town.  The one thing Lauren didn’t expect to happen was to run into the man she met at the airport; the one who kissed her and caused visions of the future to appear.

Mark Sterrett was being blackmailed.  He would do anything to protect his family from the dangerous people who were making threats against them.  The one thing Mark didn’t see happening was for him to fall for the woman he was supposed to be watching.  As he got to know Lauren, he wanted to help her too.  This put Mark in a sticky situation, but with a little luck and some good planning, he might be able to save his family, Lauren and the whole town of Surrender.

This is the second book in the Calamity Valley series, but it can be read as a stand-alone.  In fact, I never had the chance to read the first book, but I will definitely be going back to read it soon.  The author’s writing style felt so real, like I was part of the story.  The book started out a little slow but I was glad I stuck with it.  It was such a fun book to read.  It is filled with action and interesting characters.