Review: A Little Bit Engaged (One Night to Forever Book 3) by Melissa McClone 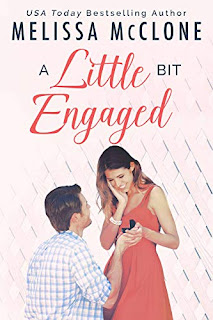 When Cara O’Neal finds herself dragged into a PR nightmare with A-list actor—and former crush—Brody Simmons, a pretend engagement seems to be the only way to stop the madness. But she’s not an actress, and faking anything with Brody has epic failure written all over it. It’ll take nothing short of an Oscar-worthy performance to survive with her heart intact.

Brody enjoys playing the role of Cara’s adoring fiancé way more than he should. Acting like he’s in love with the pretty bookworm isn’t exactly a chore. She’s always been a good friend, but he can imagine her as more, which complicates their charade. When the lines between make-believe and reality blur, can Cara and Brody turn their fake relationship into a true happily ever after?

A forbidden crush turns into a happily ever after.

Cara O’Neal has had a crush on actor Brody Simmons since high school, but she kept it to herself because he was dating her twin sister, Caitlin.  They were Hollywood’s hottest couple.  But, one night when Brody shows up at Cara’s apartment asking a favor of her, Cara learns the romance between Brody and Caitlin fizzled out a long time ago.  They have just been pretending to date because of a movie series that they star in together.  Now, Brody needs Cara to pretend to be his fiancé to cover for a lie Caitlin told the press.  Caitlin said Brody has been seeing her sister and they are engaged.   Cara soon finds herself playing the role of a lifetime, even though she isn’t an actress.  The end result leaves Cara and Brody with the happily ever after they deserve.

This book was a lot of fun to read.  I really got caught up in the story.  I felt bad for Cara and Brody who got caught up in her Caitlin’s.  But, I was glad they ended up together.  They were good for each other.