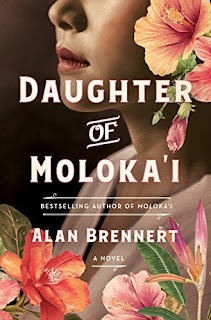 Alan Brennert’s beloved novel Moloka'i, currently has over 600,000 copies in print. This companion tale tells the story of Ruth, the daughter that Rachel Kalama—quarantined for most of her life at the isolated leprosy settlement of Kalaupapa—was forced to give up at birth.

The book follows young Ruth from her arrival at the Kapi'olani Home for Girls in Honolulu, to her adoption by a Japanese couple who raise her on a strawberry and grape farm in California, her marriage and unjust internment at Manzanar Relocation Camp during World War II—and then, after the war, to the life-altering day when she receives a letter from a woman who says she is Ruth’s birth mother, Rachel.

Daughter of Moloka'i expands upon Ruth and Rachel’s 22-year relationship, only hinted at in Moloka'i. It’s a richly emotional tale of two women—different in some ways, similar in others—who never expected to meet, much less come to love, one another. And for Ruth it is a story of discovery, the unfolding of a past she knew nothing about. Told in vivid, evocative prose that conjures up the beauty and history of both Hawaiian and Japanese cultures, it’s the powerful and poignant tale that readers of Moloka'i have been awaiting for fifteen years.


A well written story that I was drawn into from the very start.

First off, this is the first book by this author that I have read.  I didn’t read the prequel to this book, Moloka’i.  It isn’t necessary to be able to understand and enjoy this book.  But, I will definitely be going back to read it just because I loved this story so much.

Daughter of Moloka’i is Ruth’s story.  Ruth was born on Moloka'i to parents who had leprosy.  She was brought to a convent in Honolulu where she would have a chance at a better life.  From an early age, Ruth struggles with being half Hawaiian and half Japanese.  When she is adopted by Japanese parents, she is brought up with their culture.  Ruth and her new family move to California to help on her uncle’s farm when she is five years old.  It turns out to be a big mistake.  They are faced with racism as soon as they arrive.  The story follows Ruth through her school age years, marrying and having children.  And, just when things seem to be going good, Pearl Harbor is bombed.  Ruth and her family are sent to live in  internment camps.  After the war ends, everyone is allowed to leave the camps and resume life, even though they don’t have a clue what they will do after losing everything they had.  Ruth also learns who her birth mother is and meets her.  She learns more about her Hawaiian side of the family and their culture, and with what it was like for her mother living in Kalaupapa, the leprosy settlement on Moloka’i.

This is a story of love, loss, triumph, tragedy and overcoming the odds with dignity.  This book is so well written, I could easily visualize the scenes.  It is one story that will stick with me for a long time.   I highly recommend it.

Thank you St Martin’s Press and NetGalley for an ARC of this book in exchange for an honest review.
Posted by Janine at 5:00 AM