Review: Cowboy to the Rescue (The Hansen Brothers Book 1) by Ann B. Harrison 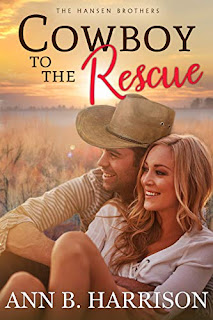 Can the twisted road to redemption lead to love?

Jethro Hansen knows how it feels to let down those he loves. Before his grandfather passed, he tried to make amends for his wild youth and has devoted his future to bringing the family ranch back to financial health. The last thing the confirmed bachelor expects is to stand in as a labor coach for his attorney, and enemy’s wife. Even more awkward, the attentive and attractive woman at the expectant mother's side is making it nearly impossible to keep his focus on his ranch and family legacy.

Sadie St. Martin interned in Denver for Layla Cox and followed her to Marietta, Montana, to run her law practice while she's on maternity leave. Sadie has some major decisions to make about her future and they become even tougher after she helps Layla through labor alongside a sexy, confident cowboy who is also a client.

Sadie’s fought hard for her career. Jethro is everything she shouldn’t want, but can this big city girl’s head overrule her heart in small town Montana?

A sweet romance with two people who are looking for a change in their lives.

Jethro Hansen was trying hard to keep from losing his grandfather’s ranch.  If he wanted to keep it in the family and keep his grandfather’s legacy alive, he needed to put everything he had into it.  He was also trying to put his troubled past behind him and become a valuable citizen of Marietta.  But some people just didn’t seem to want to believe he had changed.

Sadie St. Martin came to Marietta to help her friend Layla run her law practice while she is on maternity leave.  The first thing Sadie encounters is her friend going into early labor and having to rush to the hospital along with Jethro to help Layla through the birth.  Sadie didn’t expect to be attracted to a man she would be working for.

Jethro and Sadie hit it off pretty quick, but will their newly found romance be enough to keep Sadie in Marietta when it’s time for her to leave?

This book took a couple chapters to hook me.  But, I really enjoyed it once I got into it.  I felt a connection with the characters and really liked who they were and where the story took me.  I look forward to reading more of this series.