Review: The Runaway Princess Bride (Castles of Dallas Book 3) by Lenora Worth 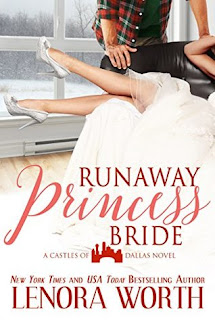 After making a serious misjudgment about the man she was about to marry, Cara escaped to the one place she always felt safe–her family’s ranch. She wants to evade the paparazzi and hide her near disastrous mistake from her family, while she tries to figure out what's next.

In need of peace after a tumultuous year supervising the building of Castle's first technology store, Aidan Castle escapes to the Double L Ranch. When he enters the den, he's shocked to find a woman sleeping in a wedding dress. Worse, he recognizes her as the beautiful socialite he kissed at Castle's costume ball. He'd felt that night was special and when Cara left, he'd lost a little piece of his heart.

Cara has no place to go, and Aidan’s not sure he wants to kick her out. When a winter storm traps them in, their attraction and bond become undeniable. Cara opens up and Aidan can't resist playing white knight and offering to scrub all details of her secret love life to save grace with her powerful brother. But then, he discovers secrets that make him question everything. Can he trust her?


Aiden Castle and Cara Lamon were stranded together at Double L Ranch, during a freak Texas snow storm.  The last time Aiden and Cara were together was the night of Lone Star Castle store party.  They got drunk and made out before Cara told him she was secretly engaged and then fled the building.  They haven’t seen each other since then.

On Cara’s wedding day, she found out her fiancé, Trey, was a con artist and only after her money.  She left him at the alter and headed back to Texas.  Her mother always told Cara and her brother that if they ever get in trouble, go home to Texas.  Texas heals all wounds.  Cara was still in her wedding gown, laying on the couch in her depressed state, when Aiden found her.  Aiden didn’t expect anyone to be at the ranch while he was working on the security system, so he was surprised to see Cara there.

When Aiden found out what happened to Cara and learned of her concern for a possible scandal right before her brother’s wedding, he used his computer skills to hide and change things online that might be used against Cara and her family.  Aiden and Cara worked together to trap Trey the betrayer and it helps them realize the feelings they both have for each other.

I completely enjoyed this book and series.  I hate to see it come to an end.  The writing, characters, setting, romance and drama all worked together to keep my eyes glued to the pages.