Review: Nobody Said It'd Be Easy by Patty Blount 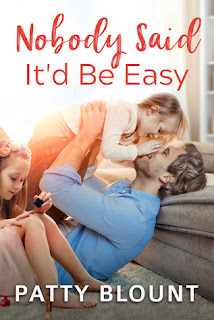 They say time heals all wounds…

It’s been two years since former engineer Gabriel Ivers lost his wife and accepted a job as a building superintendent to be home with his children. His focus is being both mom and dad to his girls, until the beautiful Amelia Blake moves next door and reminds him he’s a man as well as a dad. Just as he begins to hope that his life can once again hold more than homework, chores, and movie-and-manicure nights with his girls, he discovers the reason for the fragility beneath Lia's warm smile.

Lia is trying to move on with her life after a miscarriage ends all hope for a baby, and a subsequent betrayal destroys her marriage. She’s charmed by her new neighbor with his sparkling manicure, multi-colored hair clips, and his brood of girls, but disturbed by the sexual tension that sizzles between them. Gabe and his daughters remind her of everything she’s always wanted and it would be so easy to take what he's offering her. But is she ready to risk her heart again, especially when her heart isn't the only one in play?

Falling in love is easy. Staying in love is hard. Good thing Gabe is a fighter who's determined to prove to Lia he’s in this for the long haul…the rest of their lives.

An emotional story about two people learning to love again.

Lia Blake was done with men.  While in the hospital, after losing her baby and having emergency surgery, her husband admitted to falling in love with someone else and he wanted a divorce.  Every day Lia had to witness them leaving their apartment building together.  But when Lia saw the new girlfriend’s baby bump, she decided it was time to move.

Former engineer and widower, Gabe Ivers, was working as a maintenance man at an apartment building.  He couldn’t swing working full time while raising four daughters.  He had to do what was best for them after losing his wife.  Gabe’s wife was the love of his life and he never planned on finding anyone else.  The day he met Lia, everything changed.  But Gabe was afraid to get involved with Lia.  He felt he was doing his late wife a dishonor and didn’t know how his kids would feel about it.

Lia and Gabe become friends and eventually lovers.  Lia even accepts Gabe’s girls as her own.  When one of the girls ends up in the emergency room, Gabe shuts down and pushes Lia away.  But with a little sneaky intervention, they just might find themselves back together again.

You want to be sure to have your tissue handy while reading this book.  You will need it.  The author did a fantastic job writing this story.  There was the perfect amount of family, love and drama in this book; along with a little heartbreak and a lot happiness.