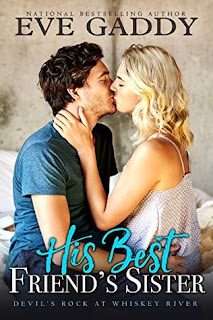 Whiskey River businessman Zack Banister has had his eye on Laurel Lewis for years, even though she's always been off-limits. The timing has never been right between them, but now that they’re both free, Zack is determined to convince Laurel that he's the perfect man for her.

The last thing Laurel needs is a white knight. She's a single mom and knows she can only rely on herself. But the thought of a fling with Zack is a different matter—and far too tempting to resist.

Then reality crashes in and Laurel faces hard decisions. And Zack will do anything to convince her to take a risk on him for their happy ever after.


Laurel Lewis was Zack Banister’s best friend’s sister.  Therefore, she was supposed to be off limits.  But Zach had always had a thing for Laurel and he was finally ready to make his move.  Laurel was a divorced single mother, living in Whiskey River in a run-down apartment.  She worked two jobs just to stay ahead.  Her plan was to eventually find a better place to live.  Laurel had been hurt by her ex and wasn’t trusting of men or her own decisions when it came to men, but she finally agreed to date Zach.  When Laurel ends up pregnant with twins, everything changes.  Zach wants to get married, but Laurel fears Zach might change like her ex did.  Zach has a lot of work ahead of him if he wants to convince Laurel how much he loves her and that he is nothing like her ex was.

I enjoyed this book a lot even though it was a very quick read.  Several times I got upset with Laurel for being so hardheaded and making Zach wait for her.  But it all played out well in the end and they got their happy ever after.