Review: Where the Wild Cherries Grow by Laura Madeleine 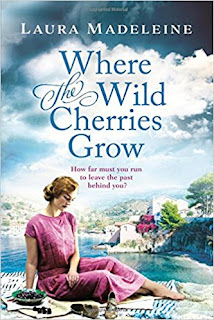 How far must you run to leave the past behind in order to find love?

In Where the Wild Cherries Grow by Laura Madeleine, it is 1919, and the end of the war has not brought peace for Emeline Vane. Lost in grief, she is suddenly alone at the heart of a depleted family. And just as everything seems to be slipping beyond her control, in a moment of desperation, she boards a train and runs away.

Her journey leads her to a tiny seaside village in the South of France. Taken in by café owner Maman and her twenty-year-old son, Emeline discovers a world completely new to her: of oranges, olives and wild herbs, the raw, rich tastes of the land. But soon secrets from home begin blowing in on the sea waves.

Fifty years later, Bill Perch, a young solicitor on his first case, finds Emeline’s diary, and begins to trace an anguished story of betrayal and love that will send him on a journey to discover the truth.

What really happened to Emeline all those years ago?


A beautifully written tale about a man who is determined to find the truth no matter what it takes.

Bill Perch is given the job of finding evidence about Emeline Vane’s death so her brother’s children can sell the family estate, Hallerton House.  But what Bill discovers leads him to believe Emeline may still be alive.  He becomes obsessed with the case and puts his personal life on the line to seek out the truth.

This book had me totally captivated. It is written in both Bill and Emeline’s points of view and takes place during two different time periods.  At first I had a little trouble keeping them separate, but it didn’t take long for me to get the hang of the author’s writing style.  I almost wish the book was longer because I was so into it and had a hard time letting go of the story when it was over.   I was also surprised as it didn’t end the way I predicted.  The ending was the perfect for this story.


A special thank you going out to St. Martin's Press for allowing me to read this book in exchange for an honest review.
Posted by Janine at 5:00 AM