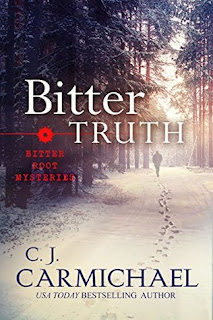 In the isolated ranching community of Lost Trails, Montana, Lacy Stillman, a rich elderly rancher has died of a heart attack in her own bed. What could be more normal than that? As Zak Waller, dispatcher with the local Sheriff’s Office, joins the town in mourning the loss of the community matriarch, some disquieting information makes Zak wonder if Lacy’s death was not what it seemed.

Meanwhile, Zak's friend Tiff Masterson is overwhelmed by her mother’s escalating mental breakdown and her aunt’s stubborn denial of the problem. Tiff’s load becomes even heavier when family friend and local lawyer Justin Pittman looks to her for help with his own serious health issues.

When an unexpected connection is discovered between the Mastersons and the Pittmans, an old crime is uncovered with far reaching ramifications that will change everything.


There are a lot of secrets in the town of Lost Trails, Montana.  But when Lacy Stillman is discovered dead in her bed, Zak Waller, dispatcher for the local Sheriff’s Office, doesn’t believe Lacy died from natural causes like everyone is being told.  He sets out to discover the truth and finds a lot more than he expected.

Zak’s friend Tiff Masterson has returned to Lost Trails after a breakup with her boyfriend.  She is back living at home and helping her aunt take care of her mother.  But it seems someone is trying to force Tiff to leave town again.  A family secret is also revealed which surprises everyone in town.

I was fully engaged in this story as soon as I started reading it.  There were a lot of twists and turns that took me by surprise.  Even though this book can be read as a stand-alone, I would recommend reading Bitter Roots first.   It will give you more of a background on all of the characters.  If you enjoy a good mystery, I would recommend this book.