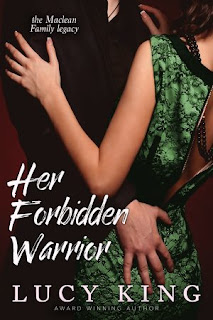 Breaking up isn’t that hard to do…

Not when Cora Maclean’s cheating scumbag of an ex disappears with a ring that has been in her family for a century. It’s the putting her life back together afterwards that’s the problem. How hard can it possibly be to go to Spain, find her ex and persuade him to return the heirloom? Her plans definitely do not include rekindling a decade-old crush on a man who once broke her heart.

Former special forces operative turned businessman, Lucas Hart, has a job to do–one that now includes keeping reckless Cora Maclean out of danger. So what if she’s more gorgeous than he remembers? She once hurt him badly and that’s not something he’s inclined to forget. His sole aim is to finish the job while keeping her safe, and he has absolutely no intention of falling under her spell again. Besides, Cora has sworn off men for now.


With a one night stand, years ago, still haunting their memories, Cora Maclean and Lucas Hunt are brought back together in a race to retrieve a stolen family heirloom before the thief leaves the country.

When Cora interferes with Lucas’ investigation and is put in danger, he has to rush to Spain to protect her.  Cora not only wanted to get back the ring from her ex that he stole when they broke up, she also had a few choice words to say to him as well.  But she had no idea how dangerous situation she was in by going to see him until Lucas showed up at her hotel door.  Cora and Lucas never forgot the time they hooked up, but the reason Lucas never called her afterward was a total misunderstanding.  Now they have the chance to make up for lost time.

I really enjoyed this story and liked seeing Cora and Lucas get back together even though it was only supposed to be a holiday fling.  The author did a good job describing the sights and sounds of Spain.  I just wish the part where Lucas was protecting Cora from the bad guys would have lasted a little longer.  It was pretty much over right after it started.  A little more suspense could have heated the story up even more.  But the romance part was good and kept me entertained.  This is the second book in a series, but can be read on its own.
Posted by Janine at 5:00 AM