Review: Undercover Princess (Castles of Dallas Book 1) by Lenora Worth 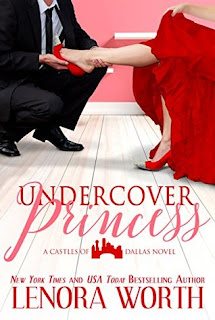 Born to an Italian father and native Texas mother, Nico Lamon returns to Texas to launch an exclusive deal with the iconic Castle Department Store. Guilty for not being there when his father died, Nico has brought the House of Lamon back from the brink of bankruptcy. He devises a marketing gimmick that will benefit both the Castles and the House of Lamon: find the perfect woman to be the fashion line's spokesperson and to wear the gorgeous Valentine shoes he personally designed. When he spots Eleanor in the crowd, he won't stop until she's that woman. His woman.

Eleanor Castle returns to Castle Department Store undercover as head of security, but she's really back to reclaim her heritage and save both the store and her aging father. Eleanor has a plan to stop her evil stepmother from her devious doings and she won't stop until she knows her face is safe. But when Nico spots her at a gala and decides she's the one who should wear the shoes and that she's also the one he wants in his life, Eleanor has to reevaluate her undercover plan. Nico slips a red shoe on her foot and captures her heart. How can she fall for a prince of a man without exposing herself and her bruised heart?


“When you find true love, you’ll find your soulmate, someone you’ll know instinctively.  Or someone you’ve been waiting for all of your life.”

Eleanor Castle is retail royalty.  She is the real heir of Castle Department Stores, but she was run off by her wicked step-mother, Caron, fourteen years ago.  Using the name Ellie Sheridan, Eleanor is back in Dallas and working undercover as head of security at the Castle flagship store.  She has gone through a major transformation and even her best friend didn’t recognize her at first.  Her goal is to find out what is wrong with her father, bring down Caron and take back what is rightfully hers before the store ends up in bankruptcy.

Nico Lamon, from the Italian fashion house, House of Lamon, has teamed up with Castle promoting a new shoe that he has designed for a Valentine’s Day promotion.  The woman who can fit in them will become their new spokesperson.  When none of the women can wear them and Nico spots Ellie in the crowd, he insists she come try them on.  Even though the shoes fit her perfectly, Ellie doesn’t want any part of it.  She has her own plan and it doesn’t include being thrust into the spotlight with Nico.  How far will Nico go to get the woman he desires and will it affect Ellie’s plans of revenge?

“Sometimes the heart knows what the head can’t figure out.”

This is the perfect start to a new series filled with lots of glitz and glamour and excitement.  I really connected with the characters.  This was a well-rounded book with a lot of details.  Even the secondary characters had me intrigued.  I can’t wait to read their stories.  I also liked that the story was set in Dallas and featured a couple familiar landmarks that I could easily visualize while reading.
Posted by Janine at 9:09 PM