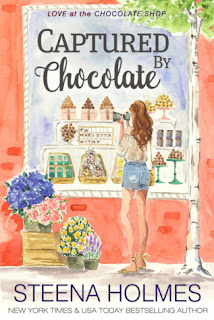 Radio DJ Dylan Morgan enjoys small town life in Marietta. Unlike his longtime girlfriend and globetrotting photojournalist Casey Michaels, he’s never been tempted to spread his wings. Until an east coast job offer at a major radio station catches his eye. He considers taking the position, but then Casey calls… She’s coming home.

After years of wandering the globe, Casey Michaels is tired and needs a break and while she didn’t plan on coming home for good, the idea is starting to grow on her. All she wants to do is spend time with her forever boyfriend, Dylan. But all she meets is suspicion as everyone waits for her to pack up her suitcase once again. To convince Dylan she’s home for good, she plans a grand gesture–a photography show celebrating Marietta life. And then, the phone rings. She’s needed in London.


Photo journalist, Casey Michaels, was always on the move from one country to the next while her boyfriend Dylan Morgan waited for her to return to Marietta.  But he was starting to lose hope for a future between them.  He doesn’t think Casey is serious about settling down.

Casey is burned out after her last assignment.  She is home for a break and needs Dylan to help her move past the heartbreak that she has endured while in Nepal.  Dylan has always been there for Casey, but this time might be the last.  He has an opportunity for a big job in New York City and is seriously thinking about taking it.  But he gives Casey one last chance.  When Casey leaves again, it’s the last straw.  Will Dylan be able to convince Casey that he needs her to be with him and not always traveling?

I enjoyed this story.  It’s an eye opener about putting aside something that might seem important to you and focusing on what is important for the one you love.  Sometimes you have to meet in the middle.