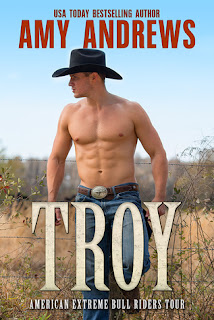 Cocky, young Aussie bull rider Troy Jensen has been busted down to the pro-circuit. He needs wins and points to get him back into the big league and a shot at being crowned champ but an injury forces him off the circuit and into the arms of the woman fate keeps putting in his path.

The first time local Doc Joss Garrity meets Troy, she’s brandishing a lug wrench. The second time, he’s dragging her delinquent teen son home. The third time, he’s in her ER. How he ends up convalescing at her house she’s not quite sure. But it does make it hard to ignore him and their simmering attraction.

As Troy gets to know Joss, he starts to see a life after bull riding for the first time. But can Joss risk her heart on another man who may not come home one day?


Australian extreme bull rider, Troy seems to be everywhere when it came to Joss.  They first met when Joss had a flat tire on the side of the road and Troy stopped to help her.  Next, Troy caught Joss’s son trying to steal from his truck and brought him home (not knowing he was Joss’s son at the time).  But the time when Troy got hurt in the rodeo and ended up in the ER with Joss as his doctor, they finally got to know each other better.

Troy was from out of town and didn’t have anyone to help him while he recovered from his injury, so Joss decided he could stay at her house.  That’s when the temptation started.  And it just escalated from there.  They couldn’t keep their eyes off each other at first.  Then they couldn’t keep their hands off each other.  But Joss fought her feelings for Troy thinking it wasn’t right because of their age difference and him always being on the road.  Troy kept trying to convince her to give in to what she was feeling.  A couple times I thought their love story wouldn’t happen.  But just when I started to have my doubts, the author surprised me with renewed hope for them.

I liked how descriptive the scenes and characters’ backgrounds were.  The story was fast paced and kept me glued to the pages.  Normally I don’t really get into romance books with an older woman and younger guy.  But I heard some good things about this one and needed to see for myself how good the story really was.  I have to admit, I was impressed.  It is a fantastic love story.  And the age difference really wasn’t too drastic.  There are also a lot of steamy scenes in this story.
Posted by Janine at 4:29 PM