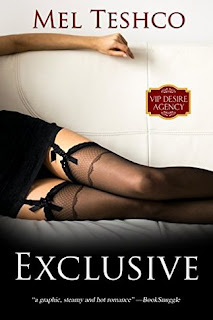 Rock star Amos Drynn isn't interested in a relationship. He’s been there, done that, and wished he’d listened to his better judgment. As the lead singer of the famous band Frankenstein’s Blood, he’s not short of female attention, but in his world, a long term relationship isn’t feasible. That is, until he purchases a night with a call girl who makes his blood run hot and has him forgetting about his fear of commitment.

Tiffany doesn’t believe in fairytales, not anymore. In her world trust is thin on the ground and promises are meaningless, especially from the mouth of a married client. A night in bed with her rock idol, Amos Drynn, will surely salve her wounded pride. But will their explosive chemistry shatter her infatuation with an ex-client or will she turn her back on Amos, the one man willing to give her everything, including his heart?


So hot!  And, just when you think this book couldn’t get any hotter, it does!

Amos Drynn, lead singer of Frankenstein’s Blood, was first introduced in the last The VIP Desire Agency series, High Class.  So I was pleased to see this book was about him and another character from the book, Natalie “Tiffany”.  Both characters are flawed and have trust issues so it makes for a fun read while they get to know each other and learn to trust again.

Natalie fell into the call girl business because she needed to make a lot of money to take care of her disabled father and give him the best life she could.  When she found out her client one night was her rock idol Amos, she was excited, but played like she didn’t like the band’s music so that she wouldn’t come across as a groupie.

Amos didn’t plan on sleeping with Natalie.  He just needed an escort for an event to keep the other girls away.  He didn’t need another obsessed groupie trying to get her claws into him.  But he soon realized he wasn’t going to be able to let Tiffany walk away after just one night.  He needed to see her again.  And then he wanted her all for himself.  And he was willing to do anything to have her.

The VIP Desire Agency series is one of my favorite from Eros Books.  So, I was excited when I saw there was another addition to the series.  I think this was the best in the series so far.  Lots of excitement, drama and super-hot intimate scenes.  The story can be read as a stand-alone, but I would highly recommend reading all of the books in the series.  They are really good.