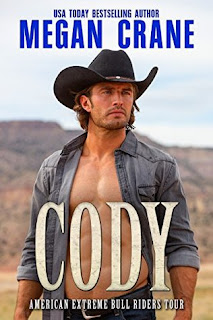 Skylar Grey lost everything when her fiancé died. But her move back to her hometown, Billings, Montana is not the fresh start she seeks, as too many people know her tragic tale. But then she meets a bull riding cowboy who treats her like she's made of fire and everything changes.

Cody Galen joined the American Extreme Bull Riders Tour to make money, not friends. He enjoys whiskey, winning, and women and he doesn’t care who he pisses off while he pursues the hell out of all three. He figures he only has a few years left before his body gives out and he might as well go down hard in a blaze of glory. He knows the pretty thing he meets his first night in Billings is no buckle bunny, but if she wants to play that role, who is he to argue?

Neither one of them is looking for anything lasting. But there’s only one thing more dangerous than riding bulls—and that’s love.


An emotional cowboy romance that was hard to put down.

When extreme bull rider Cody Galen met Skylar Grey in Billings, Montana, he knew she wasn’t like the rest of the women he met while traveling with the rodeo.  She wasn’t a buckle bunny like she pretended to be, but he went along with her game because he was intrigued by her.

Skylar is back home in Billings after her fiancé died.  She just wanted to start her life over again.  When she meets Cody, she didn’t expect much.  It was just supposed to be a fling.   But then her heart rebelled on her.

Cody is used to living his life in the fast lane.  He doesn’t want to settle down, but he knows eventually he will have too.  He knows he can’t ride bulls much longer and will have to decide what to do afterwards.  Falling for a women wasn’t exactly the first thing that came to mind, but it happened, and it happened fast.

This book had it all, intense romance, emotional situations and a great story.  Anyone who loves a good cowboy romance needs to add this book to their reading list.