Her Sinful Secret: A scandalous story of passion and romance (The Disgraced Copelands) by Jane Porter - Review 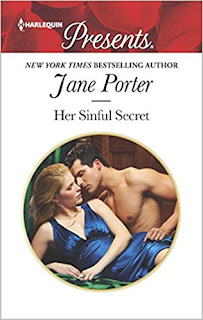 The secret she never told…

Heart racing, Logan Copeland cannot look away from tycoon Rowan Argyros as he declares her life is in danger. All she can think is that Rowan took her virginity, heartlessly rejected her after a night of reckless abandon…and is the father of her child. She must reveal the truth before she's whisked away to Rowan's castle for safety…

Isolated together, Logan finds herself at the mercy of Rowan's unrelenting need to claim her—and their daughter! Logan has known no touch but his, and yearns to feel it again…but to do so, she must agree to meet him at the altar!


The Copeland family has been riddled with scandal ever since Daniel Copeland swindled people out of millions of dollars.  Now Daniel is dead and his family is believed to be in danger.

Three years ago, Logan Copeland won a charity bachelor auction and ended up spending a passion filled night with tycoon Rowan Argyros.  It was a night Logan would never forget.  Rowan took her virginity and left her pregnant.  Logan’s daughter is a secret that she has kept hidden from all but those who are very close to her.  Now that Logan’s life is in danger, Rowan has been sent to protect her.  When Rowan finds out he has a daughter, he will do what it takes to give her a perfect family, even if it means forcing Logan to marry him.

This story is exactly what you want when you pick up a Harlequin romance.  It is passionate and steamy with a great alpha male.  I found it hard to put this book down.